Analyzing the effect of heatwaves on forest

The fields of environmental science and remote sensing experience an explosive growth of data. The proliferation of data also give rise to the increasing complexity of data, like diversity, dimensionality and origin. ESA’s Earth System Data Lab (ESDL) is a new virtual lab to explore a wide array of Earth observations across space, time and variables and enabling access, manipulation and analyses different variables.

Especially services that provide a user-friendly and automated approach to generate ESDL data cubes are an asset to remote sensing. Thus, they enable fast analyses for various study areas of different scale to better understand the interaction of global climate change and local environments.

As an example, in the recent past Germany experienced two consecutive extremely hot summers during the years 2018 and 2019. As one unusual warm and dry hydrological year alone mostly exhausts the yearly water resources the subsequent following of another year like this prevents the regeneration of water storages. The question arises whether this shows an effect on forests as well and periods of drought and heatwaves cause increased stress on forest vegetation.

Timeseries of satellite images are important for understanding the effects of extreme events on the local environments. While spectral measurements are affected by clouds, radar passes through them. The ESDL enables the combination of both types of measurements and allows for a monitoring of the forest condition.

In this Early Adopter case the region of interest is the Hainich National Park in Thuringia, Germany, one of the few preserved primeval beech forests in central Europe and therefore protected as UNESCO World Heritage.

Analyzing ESDL data cubes, the immediate short-term effect of heatwaves on forest vegetation could be indicated. Moderate drops in vitality during the summer months of an unusual dry and hot year preceded by another extreme summer the year before could be observed as well. 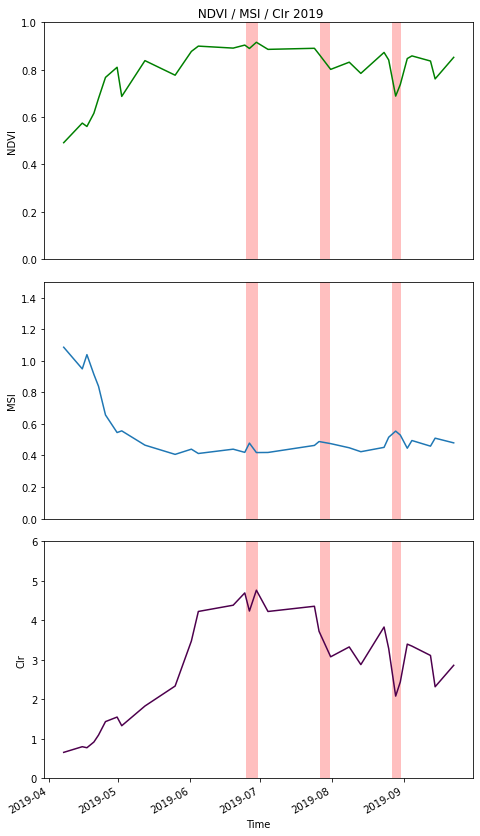 Time series of the spectral indices NDVI, MSI and RVI (spatial median) for the observation period of 2019. Selected Europe-wide heatwaves are highlighted in red.